Dictionary by Dmitrii Kouznetsov. Mathematics. conditions of use of this document 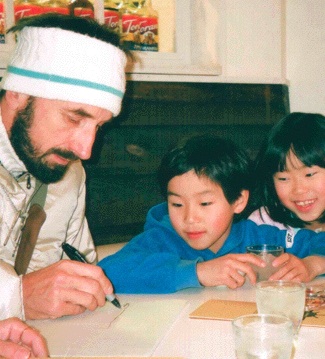 Mathematics is the most general science that deals with logics, sets, various classes of numbers and other constructions in the formal axiomatic way through the definitions, axioms, and theorems. With high level of abstraction, mathematics became the kernel of the scientific knowledge; it is widely used in other sciences and other kinds of human activity.

In certain sense, the logics is more fundamental than arithmetics. Logics deal with statements that can be true or false. For complicated logical constructions, the logical variables are used.

Logical variables may have value TRUE or FALSE. The operations and and inclusive or are allowed with these variables; if two expressions, say, a and b always have equal values, it is expressed with special symbol "=", which means equivalence; one writes a=b. With this symbol, the basic rules of logics can be written as follows:

The logical operations are commutative:

The grouping operations, id est, parenthesis, are used to specify order of application of these operations. The logical operations satisfy the simple rules:

which are called associativity, and

With these rules, the complicated logical constructions can be considered, simplified and used. In particular, the logical operations are widely used in the computation. Many other objects are constructed on the base of logical variables.

All objects considered in mathematics or treated mathematically are supposed to belong to some certain set. According to the definition of science, the deal with really ANY object from ANY set is prohibited. Such a prohibition is not caused by the personal preference of some mathematicians or some caprice of the writer of this Dictionary. Such a prohibition follows from the pretty practical reason: consideration of objects from the whole set leads to the internal contradictions.

Historically, in the educational process, the students (usually children) first learn some practical bases of arithmetics, and only then they begin to deal with logics and the sets (if at all, of course). The fundamental of the sets, as well as the fundamental of logics, look obvious and in many situations they can be used even without the axiomatic and rigorous deduction. The equivalent objects may be stones of similar size, animals of similar kind, humans, steps from one place to another place, cycles of some almost periodic process, etcetera. In some sense, days, or years, or tides at the sea, can be considered as equivalent. It was very fundamental discovery, that the same rules of counting can be applied to pretty different kinds of objects to characterize their amount. The human, who was first to discover and formulate this, was great mathematician. in order to deal with such a quantity, the natural numbers are used.
It is assumed that there exist a set, called natural numbers, with certain operations, that satisfy the certain axioms.

For any natural number a, there exist and only one number called a++, which is different from a.

For any non-equivalent natural numbers a and b the logical operations "<" and ">" are defined such that one and only one of the two expressions is TRUE, and another is FALSE:

Also, for every natural number a the relation a++ > a holds.

One may replace any natural number with its equivalent in any expression without to change value of the expression.

Then, it is assumed that for any natural numbers a and b, the arithmetic operations "+" and "*" are defined such that

and for all natural numbers a, b, c the "associative" relations holds:

Sometimes, letters K, M, G are used for big numbers, but they easy cause confusions. Human cannot agree about their values. Some people believe that K means kilo=1000=thousand; M=1000000=million, and so on; some other know that K is a little bit more than just thousand, namely 1024.

The ability to compare some parameters of various objects needs the concept of measurement, which means comparison of various objects to the same object called etalon or measure. The ability to repeat, reproduce the measurement with the same result leads to the special branch of physics called metrology. The measurement allows to characterize some quantities of pretty distributed objects with natural numbers. The "smaller" is the ethalon, the more detailed is the characteristics with such an natural number. However, very small etalons are not practical in use. this boosted construction of some "other numbers", elements of other sets, which are neither logical variables, nor natural numbers. In such a way, one construct:

integer numbers that include not only natural numbers, but also zero, and negative numbers, allowing to extend operation "-" to any pair of element of this set;
rational numbers, with allow division of any rational number by any natural number;
real numbers, that allow to deal with the transcendentental functions;
complex numbers, that allow solution of any algebraic equation;
quaternions, that simplify the consideration of some linear operators and non-Abelian groups, and so on...

At the level of the complex numbers, the construction of beautiful holomorphic functions become possible, and investigation of properties of these functions form the important (and perhaps main) part of the mathematical analysis.

Elementary functions and the mathematical analysis

The important branch of mathematics is the Matan, or mathematical analysis. This science deals with sequences and series, functions, accurate building-up the real and complex numbers, definition and deduction of properties of derivatives and integrals, and solutions of the functional equations; in particular, the differential equations and the integral equations. In schools, properties of some elementary functions (sin, cos) are postulated through the Axioms by Euclid, although they can be deduced from the axioms of arithmetics.

where parameter b is constant; usually, this constant is assumed to be real or even natural. This parameter is called "base". Also, often it is assumed that the first argument of the Ackermann function is natural number. For this reason, the notation

can be used. By definition, A1 is expressed in terms of summation; then, A2 refers to the multiplication and A3 refers to the exponentiation:


At least for the positive values of base b, these functions are entire, id est, they are holomorphic in the whole complex plane, at any complex values of the argument z. The concept of superfunctions allows to evaluate each Ackermann Ak for k>1 , assuming, that the efficient procedure for evaluation of Ak-1 is already implemented.

The most of the mathematical analysis of IXX-XX centuries is based on the first three Ackermans: summation, multiplication, exponentiation and the inverse functions and their combinations. The special mathematical notations are used in order to write expressions with functions in a compact form. The multiplication "*" is used so often, that this symbol usually is just omitted. (Sometimes this notation causes confusions; the two letters written together, are interpreted as a name of a functions as well as a product of two variables.)

On the base of elementary functions, the multidimentional spaces can be constructed, and, in particular, the Euclidean spaces. In the simplest case, the bidimensional Euclidean space is built of points; the point x is defined as the pair of real numbers x1 and x2:

Such a way of building up of the Euclidean space refers to the Cartesian coordinates.

Then, the line is determined as set of solutions of a linear equation for the coordinates x; for example,

Historically, the constructions of geometry was developed in a way, completely different from the definition of the distance above. In the pre-historic Euclidean geometry, the properties of objects in the two–dimensional space were not deduced, but postulated as axioms. Then, on the base of these axioms, the expression for distance defined above appears as the famous Pythagorean theorem. On the base of these theorem, the properties of trigonometric functions, sin and cos, can be deduced; and it happens, that these functions are just the same, as sin and cos deduced from the mathematical analysis. In addition, the 5 Euclidean axioms are not sufficient to develop even the Euclidean geometry; of order of 20 Hilbert's axioms are necessary for the correct deduction.

Up to beginning of century XXI, the system of education usually follows the pre-historic tradition. The children have to remember the axioms by Euclid, and deduce many theorems in order to come to the Pythagorean theorem.

In such a way, the properties of the trigonometric functions in the schools are postulated through the Euclidean geometry (instead to be deduced, minimizing the amount of assumptions). Construction of geometry through the Cartesian coordinates does not require additional postulates and in this sense is simpler than that through the axioms by Euclid. According to the definition of science, the Cartesian way should be considered as principal with respect to the antique Euclidean geometry.

Many branches of mathematics

The development of mathematics causes the the new and new branches, that become partially separated from others and can be considered as independent sciences. In particular, this happens to the
Theory of probability,
Mathematical statistics
Game theory,
Computational mathematics, Numerical simulations,
and many other sciences. Some of them deviate from the general idea that all the statements should be either postulated or deduced as theorems. However, it is supposed to follow the same rules, properties, postulated in the definition of science, over-vice such an activity and knowledge can be considered as a relligion, in a best case. For example, the Astrology does not become part of mathematics (nor part of science), even if it uses some mathematical methods, computer facilities and allow some predictions and forecasts. (In certain sense, the same refers to many branches of philosophy, where the negation of paradigms is not allowed; such philosophies should be also qualified as religions.)

Although the different approaches are allowed in various branches of mathematics, the concepts of sets, logics and numbers are commonly used.

I disagree the definition of Mathematics I meet in the literature; especially poor is the deduction of properties of sin and cos from the Euclidean axioms and Pythagorean theorem. For this is reason why I wrote this article. However, I could not mention all the branches of mathematics here. If you feel that I should mention some, let me know.

There is no need to predict the development of mathematics, or the science in general. But we should formulate that we already know in the most compact and general and usable form, without to assume additional axioms for the statements we can deduce. If we introduce some additional assumptions, let them refer to the statement we can verify with scientific methods but cannot yet prove.

Perhaps, there are some personal preferences in the choice of the additional assumptions. From my point of view, now is good time to verify and postulate (if we cannot yet provide the rigorous deduction) the existence and uniqueness of the holomorphic extension of the Ackermann functions. This can be done in the same way, as properties of the Euclidean space and trigonometric functions were postulated before the discovery of the complex exponential, differential equations and the Ackermann functions.

References
http://en.citizendium.org/wiki/Mathematics
http://en.wikipedia.org/wiki/Mathematics
http://www.ipod.org.uk/reality/reality_wigner.pdf Eugene Wigner. The Unreasonable Effectiveness of Mathematics in the Natural Sciences. Communications in Pure and Applied Mathematics, vol. 13, No. I (February 1960).
http://www.math.ucla.edu/~cbm/aands// Abramowitz and Stegun: Handbook of Mathematical Functions. http://www.ils.uec.ac.jp/~dima/PAPERS/2010mestoe.pdf Dmitrii Kouznetsov. Place of science in the human knowledge.

Click here to formulate questions or to request references.